Home News Analysis How Venezuela’s Stolen Gold Ended Up in Turkey, Uganda and Beyond
SHARE

What do such distant countries as Venezuela, the Bahamas, Ireland, Morocco, Dubai and Turkey have in common? They were all part of the trade routes for illicit Venezuelan gold in 2018.

The Venezuelan Central Bank (BCV) sold 73.2 tons of gold in 2018 to two companies in the United Arab Emirates (UAE) and one in Turkey. The sales took place without the National Assembly’s approval, as mandated by Article 187 of the National Constitution. The claim, presented in February 2019 by deputy Carlos Paparoni, president of the National Assembly Finance Commission, recalled there could be no contracts of national public interest with foreign states or companies without the approval of the parliament.

*This article was edited for greater clarity and published with the approval of Runrun.es. It does not necessarily represent InSight Crime’s opinions. Read the original article here.

Runrun had access to leaked documents that detailed how the BCV’s gold exited the country throughout 2018. The data was compared with information from Flightradar24.com, a public website with real-time information about global air traffic, allowing the verification of each flight’s routes and reference numbers. Some of these transfers of gold were made on private aircraft but others went aboard commercial Turkish Airlines flights from Caracas to Istanbul.

According to the customs records accessed by Runrun, 73,2 tons of gold bars were sold between the Emirati company Noor Capital (27.396 tons), the Turkish company, Sardes Kiymetlí Madenler A.S (23.994 tons), and a Belgian firm based in the United Arab Emirates, Goetz Gold LLC (21.886 tons). A total of 33 gold bar shipments were transported on 27 Turkish Airlines, and five on Copa Airlines (Panama), Solar Cargo (Venezuela), Rotana Jet Airlines and E-Cargo Airlines (both from the UAE). Only one of the 33 flights has not yet been identified.

The total of gold exported by the BCV in 2018 was eight times higher than the 8.65 tons of internal gold production registered in Venezuela up to May 2018. 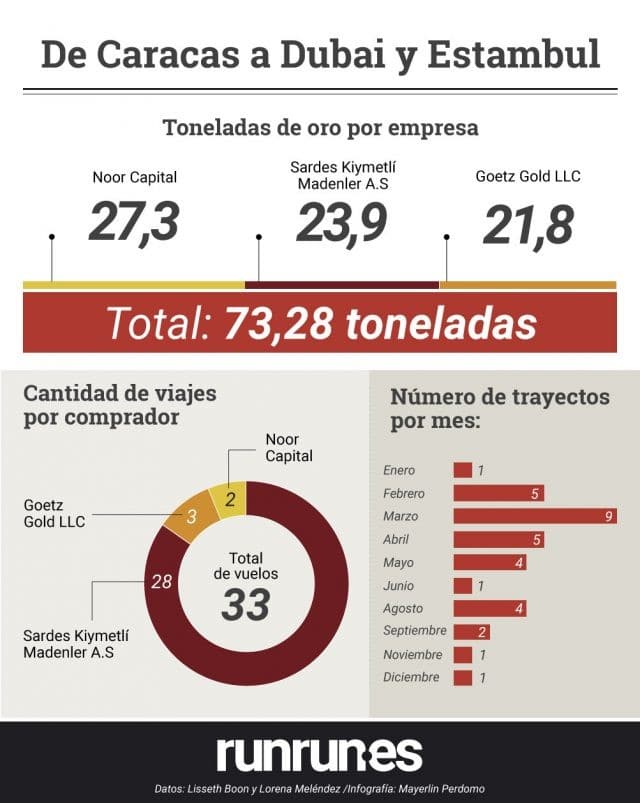 It is unknown whether the 73 tons exported by Venezuela during 2018 came from the BCV’s reserves or from unreported production in the Orinoco Mining Arc.

Although there has been a 56 percent fall in gold reserves since Nicolás Maduro took office in 2013, there was a slight increase of 11 tons 150,216 gold tons in January to 161,22 tons in September 2018, according to data from the World Gold Council. These numbers include the 8,6 tons registered by the BCV as 2018’s internal production.

21.8 of the 73.2 gold tons exported by the BCV in 2018 were bought by Goetz Gold LLC, a Belgian company with offices in Dubai, and which is facing severe scrutiny. It is being investigated by anti-corruption agencies in Europe and Africa for trading in “blood gold”, defined as metal extracted in areas of conflict, financing crime and wars, and promoting the violation of human rights.

Goetz Gold LLC is part of the Tony Goetz group, headquartered in Antwerp, Belgium, known as the global capital of the diamond trade.

Goetz Gold is under suspicion for being part of an illegal trafficking network of conflict minerals. The company exports gold to Europe and the US processed by the African company African Gold Refinery (AGR) in Uganda, the largest refinery in sub-Saharan Africa and completely owned by the Belgian consortium. Part of the material this factory uses to produce their gold bars comes from the Democratic Republic of the Congo (DRC), where the vast majority of mining activity is illegal and serves as a financing source for the purchase of arms.

These accusations are based on the compelling investigation, “The Golden Laundromat”, published in October 2018 by The Sentry. This is an anticorruption organization based in Washington DC, which monitors businesses contributing to violence in Africa, co-founded by US actor George Clooney.

But the gold refined by the AGR does not only come from their African neighbors. Recently, the Ugandan company admitted to receiving material from an unspecified country in South America. The Ugandan official media indicated this country could be Venezuela, where the government currently relies on gold sales to obtain liquidity amid its collapsed economy and to avoid sanctions imposed by the US and Europe.

On March 13, police authorities in Uganda announced they were investigating the legality of an import of 7.4 tons of gold to the Ugandan refinery made in March 2019 with an estimated value of US$300 million.

Goetz Gold bought 21.8 tons of gold from Venezuela in 2018, which represented 30 percent all international sales of gold by the central bank. The largest single shipment of 15.6 tons happened on December 3, 2018, shortly after the US announced sanctions on anyone carrying out transactions involving Venezuelan gold.

The gold sourced by Goetz Gold was transported from Maiquetía Airport by Emirati airline Rotana Jet and Russian airline E-Cargo, neither of which have commercial flights from Venezuela.

Runrun.es attempted to confirm these facts with Goetz Gold president, Alain Goetz, in February 2019 but received no answer.

Almost 24 tons of Venezuelan gold (23.994 kilograms) had left for Istanbul onboard 28 flights executed between January and September 2018, as stated in the leaked information obtained by Runrun.es.

After departing from Venezuela, the “blood gold” –extracted from deposits being controlled by criminal groups, where massacres are known to take place and workers who disagree are often murdered– was taken on by the private Turkish company Sardes Kiymetlí Madenler A.S. This company had a sales agreement with Maduro, through the BCV, according to the revelation made by deputy Carlos Paparoni in early February.

The documents indicate that each of the Sardes flights transported between 226 and 3,721 kilograms of gold. Most of the 27 flights were by Turkish Airlines, which started operating in Venezuela in 2016 and since increased weekly flights from Caracas to Istanbul from three to five.

Only one of the flights involved another airline, Panama’s Copa Airlines, which transported 543 kilograms of gold on March 20, 2018.

Even though Copa denied involvement in of this flight, this itinerary’s explanation can be found in the code share agreement between Turkish and Copa Airlines, signed in April 2017. Both companies are members of the global airline network Star Alliance. Every week, a number of Copa flights depart from Maiquetía, transfer in Panama and continue to Istanbul on Turkish Airlines aircraft. The March 20 flight was one such occasion.

The majority of gold transfers, 23 out of 28, happened during the first half of the year. By May 2018, 21.3 tons had already been transferred to Istanbul at a value of US$779 million. Reuters confirmed the shipments reached a value of US$900 million for the entire year.

Last July, Venezuela’s minister in charge of mining development, Víctor Cano, acknowledged that the central bank had begun exporting gold to Turkey to be refined there, a process that had not happened in the past. There are no reports of this gold returning to Venezuela.

Venezuela had previously sent gold to be refined in Venezuela but US sanctions caused the European country to draw back from this practice.

This is not the first time that Turkey has established commercial relations with countries sanctioned by the US Treasury Department. Iran is one such case, which according to Bloomberg, buys billions of dollars of oil from Venezuela. The money from these transactions goes to Turkish accounts where it is “trapped” due to international restrictions. Previously, however, gold was also used in trade with Iran. A BBC story revealed suspicions about the presence of Venezuelan gold in Iran.

*This article was edited for greater clarity and published with the approval of Runrun.es. It does not necessarily represent Insight Crime’s opinions. Read the original article here.

How Venezuela's Stolen Gold Ended Up in Turkey, Uganda and Beyond