Over the last decade, Honduras has seen a proliferation of laboratories capable of transforming coca leaf into cocaine hydrochloride. This means that Honduras, once only a transit point for drugs, is becoming a cocaine producer.

According to sources within the Honduran police consulted by InSight Crime, as well as reporting by La Prensa, 12 laboratories have been identified between 2009 and 2020. All the laboratories were used to transform the coca leaf while others also operated as nurseries for coca plants. The information gathered showed that at least one of these facilities was successful in producing hydrochloride to make cocaine.

The discovery of the laboratories was mostly done by Honduran police and army but others were identified due to confessions made by drug traffickers in US courts.

Authorities do not have exact calculations of the production capacity of these drug laboratories. But the US Justice Department documents indicate that one laboratory, strategically located in the northwestern department of Cortés, close to the Atlantic Ocean and the routes that connect Guatemala and México, had the capacity to produce some 3.6 tons of cocaine annually.

InSight Crime investigations in Honduras indicate that since 2009, functional laboratories have been found in the western departments of Lempira, Santa Bárbara and Copán, located in mountainous regions close to highways and runways along which cocaine has been moved for a decade. Some of the groups behind these facilities even enjoyed political protection.

Between 2011 and 2012, the first rudimentary labs in northern Honduras were found in territory controlled by a drug trafficking gang, known as the Cachiros.

And a laboratory in Cortés has been operating since 2009, according to sources within the Honduran police consulted by InSight Crime in Tegucigalpa.

Between 2009 and 2013, according to an indictment issued by the Prosecutor’s Office of the Southern District of New York, alleged Honduran drug trafficker Giovanny Fuentes operated a laboratory capable of producing between 300 and 500 kilograms of cocaine per month in Omoa in Cortés. According to US prosecutors, this laboratory received protection from Juan Orlando Hernández, the current president of Honduras.

In 2014, the police also discovered a marijuana and coca plant nursery in La Iguala, Lempira. Leandro Osorio, the police chief in charge of localizing and destroying the laboratory, told InSight Crime that he found some 6,000 coca and marijuana plants there.

During the operation in La Iguala, Osorio and his team arrested a Colombian and a Honduran, who were handed over to prosecutors in Gracias, the capital of Lempira department, along with samples of the plants.

According to a report Osorio later provided to his bosses to which InSight Crime had access, the Colombian citizen arrested received legal advice from a law firm associated with former deputy Juan Antonio “Tony” Hernández, the brother of President Hernández convicted of drug trafficking in the United States.

Honduras has been without a doubt the focal point of Central American drug trafficking for years, but the country is now entering a new chapter.

After several years of experimenting with crops in various inhospitable areas of the country, Honduran drug traffickers are now almost certainly able to produce their own cocaine hydrochloride.

This evolution from a transit country to a cocaine producer has a lot to do with the protection drug traffickers have received from the government.

The country opened up to cocaine trafficking in the mid-1980s, when Juan Ramón Matta Ballesteros, one of the main links between Colombia’s Medellín Cartel and Mexico’s Guadalajara Cartel in Central America, established the Honduran bridge.

Over time, following Matta’s capture in 1988, gangs of dairy, timber and livestock smugglers re-initiated contact with Colombian producers and Mexican distributors. A decade later, following the devastation wrought in Honduras by Hurricane Mitch, the contraband smugglers turned into narcos and started to take over the routes going through Honduras. The groups included the Atlantic Cartel in the department of Gracias a Dios, the Cachiros in Colón and Yoro, the Amador Family in Olancho and the Valles and other smaller groups along the border with Guatemala.

SEE ALSO: 4 Takeaways from the US Trial against the Honduras President’s Brother

These groups have moved tons of cocaine from Honduras to Guatemala, Mexico and the United States since the beginning of the decade.

In 2014, only the Valles had the capacity to move 47 tons of cocaine, according to calculations by InSight Crime based on information included in US court documents from the trial of clan leader Miguel Arnulfo Valle. It does not seem to be a coincidence then, that at least four of the 12 laboratories in Honduras were located close to routes controlled by the Valles. 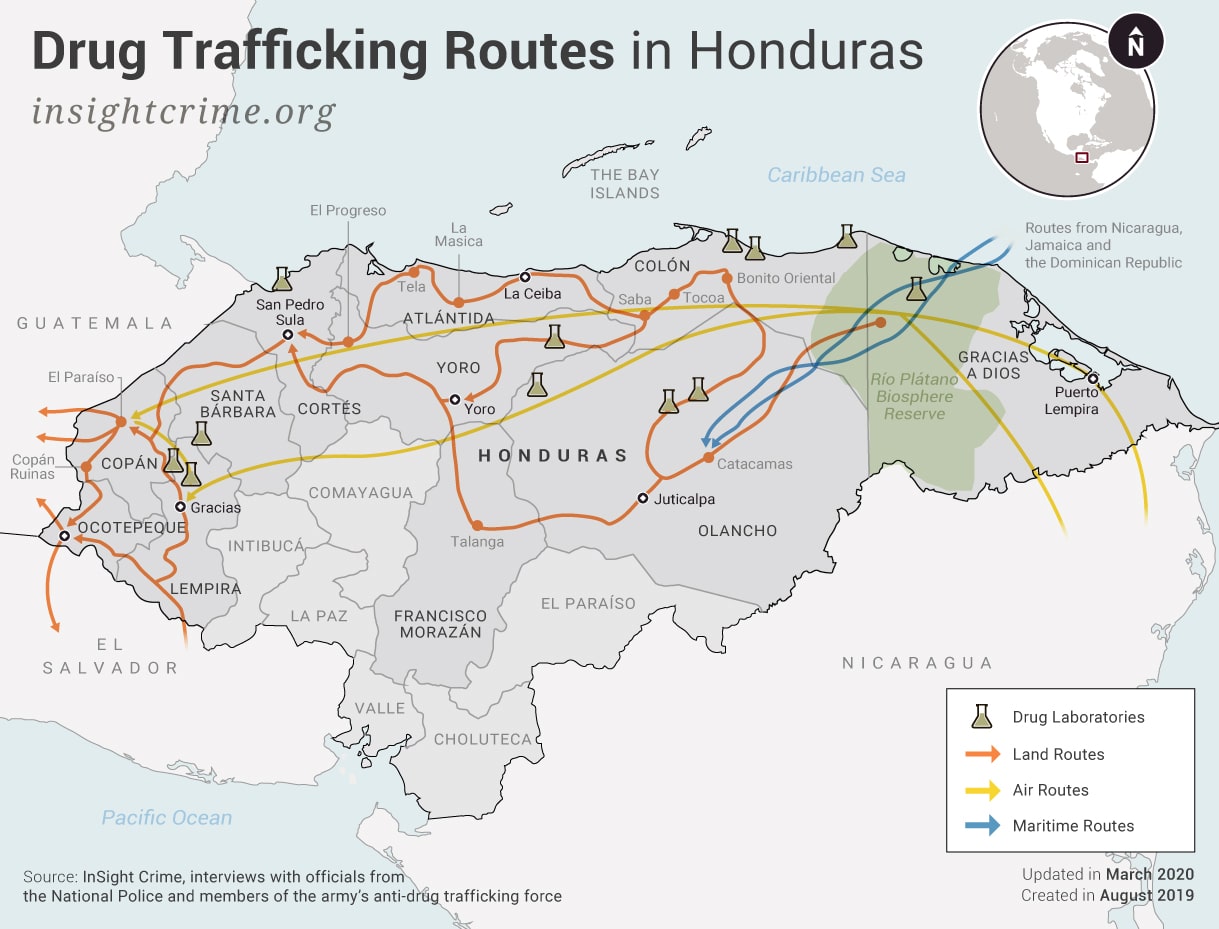 This case, of all those conducted in the United States against Honduran politicians and drug traffickers, is the one that has provided the most insight into Honduras’ evolution into a cocaine producer.

Meanwhile, the most recent revelation of the existence of a laboratory belonging to drug trafficker Geovanny Fuentes, is also believed to have received protection from President Hernández.

Previously, in the trial for drug trafficking charges against Fabio Lobo, the son of former president Porfirio Lobo, President Hernández’s predecessor, details emerged about the Cachiros’ efforts to set up drug laboratories in the northern departments of Colón and Yoro, along the Atlantic coast and near landing strips for drug flights in the surrounding mountains.

Becoming the first cocaine-producing nation in Central America is a logical step for Honduras: extraditions of drug traffickers and politicians protecting them haven’t made a dent. The country’s cocaine-fuelled criminal economy is in excellent health.