The announcement in late August that three important former leaders of the demobilized FARC were returning to war did not only threaten the fragile Colombian peace agreement but raised questions about the power the ex-FARC Mafia have in neighboring Venezuela.

Historically, Colombian guerrilla groups have used Venezuelan territory to regroup and find shelter due to former governments essentially turning a blind eye. But the situation has now shifted with dissidents from the Revolutionary Armed Forces of Colombia (Fuerzas Armadas Revolucionarias de Colombia – FARC) and their leaders being welcomed with open arms.

Dissident fronts have found other reliable ways to boost their income and rebuild their army in Venezuela, such as through the illegal mining of gold and coltan, as well as the recruitment of vulnerable Venezuelan citizens.

InSight Crime looks into how and why the ex-FARC Mafia set up such a foothold in Venezuela and what this could mean for the country going forward.

Leaders of this new FARC dissident group have found in Venezuela the perfect conditions to defend once again their ideological, criminal and economic interests. Abandoning a peace process marred by increasing disillusion among demobilized soldiers in Colombia, the three leaders were met with open arms by a Venezuelan government all too willing to house them and are forging an alliance with the now transnational National Liberation Army (Ejército de Liberación Nacional – ELN).

To stand against sanctions and the specter of foreign intervention, Maduro wants to be seen as a powerful adversary. To do so, he aims to take advantage of all the potential “armies” and criminal allies that he believes would be willing to defend him in case of a foreign military incursion. Márquez’s announcement also serves the Venezuelan president to test what adversaries in the United States and Colombia might be willing to do.

For their part, the ex-FARC Mafia bosses need Venezuela where they can enjoy strategic access to Colombia, the support of a government, direct access to weaponry and ammunition and a chance to sustain their drug trafficking business.

The unprecedented alliance with the ELN, which featured prominently in Márquez’s address, also allows this new dissident group to immediately count on a solid support base.

“This alliance is already a fact. The actions seen in the field point towards an already clear association between both groups,” Professor Alexander Campos, of the Center for Popular Investigations of Venezuela, told InSight Crime.

However, the future of this criminal association is uncertain, as each ally has its own interests. 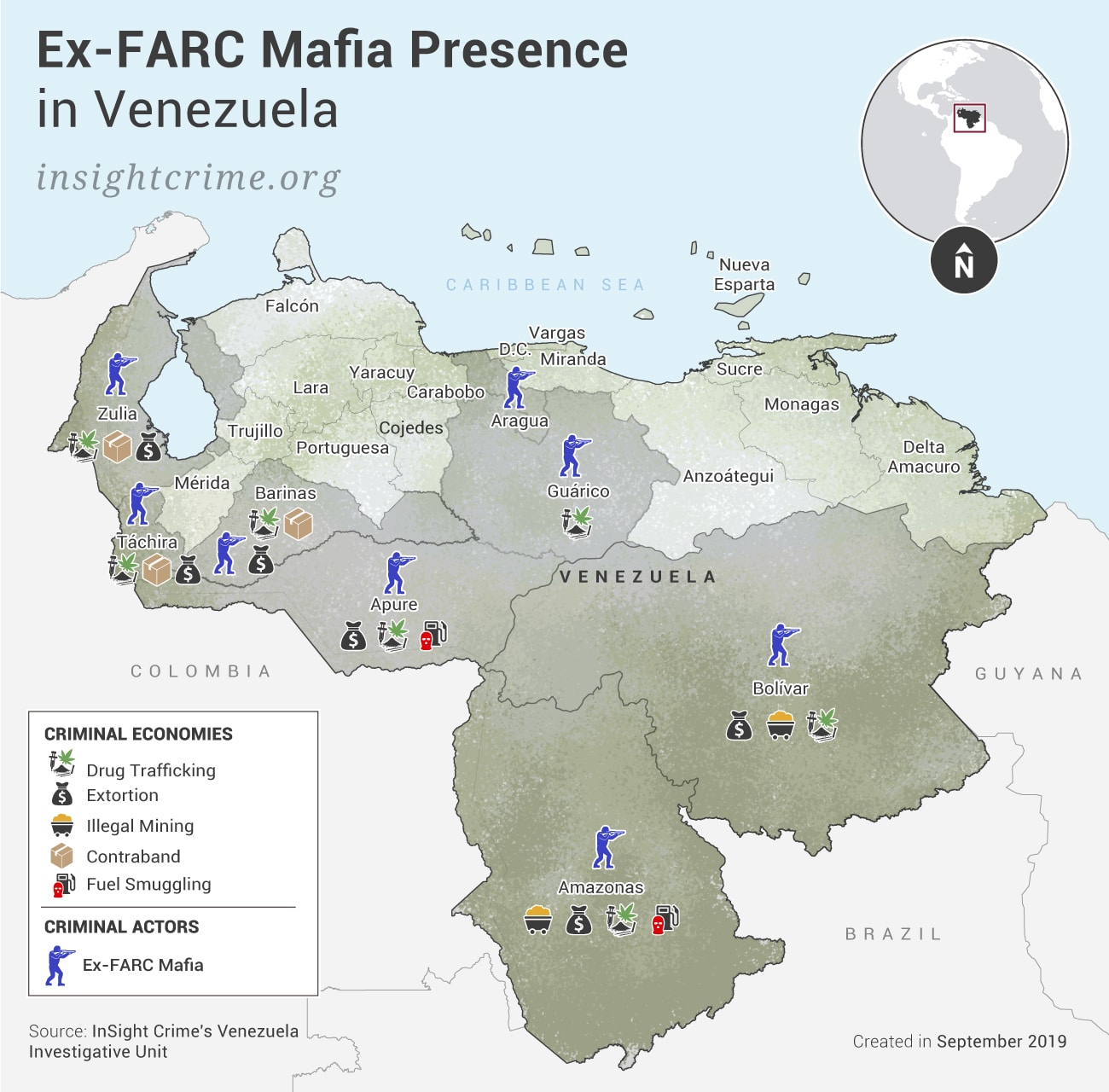 Additionally, InSight Crime had access to a report from the Venezuelan National Guard (Guardia Nacional Bolivariana – GNB), dated August 26, 2019, which detailed the presence of ex-FARC Mafia in specific municipalities across Bolivar state.

“There is knowledge based on unconfirmed information from cooperating patriots…about members of the FARC…operating in…the municipalities Sucre, Cedeño, El Callao, Sifontes and Gran Sabana of Bolivar State,” says the document, which details the actions of different criminal groups in this mining region.

In Apure, the ex-FARC Mafia have been linked to the Patriotic Forces of National Liberation Force (Fuerzas Patrióticas de Liberación Nacional – FPLN), a Venezuelan guerrilla group which received logistical and operational support from the FARC before they disbanded.

In Táchira, elements from the ex-FARC Mafia have taken part in the violence to control border crossings through which drugs, weapons, migrants and contraband flow. They have also been linked to the Border Security Colectivo, a paramilitary organization linked to the Venezuelan government.

A report by International Crisis Group in February 2019 documented that a group of ex-FARC fighters from the Acacio Median Front, led by Géner García Molina, alias “Jhon 40,” are operating in at least four locations in the state of Amazonas: Alto Orinoco, Atabapo, Maroa and Río Negro. While Jhon 40 was thought to be aligned with a different faction of the ex-FARC Mafia, he appeared alongside Iván Márquez in last week’s call to arms.

Campos told InSight Crime that FARC dissidents have also been found to a lesser extent in four other states where they exert some influence through alliances with local gangs, bringing their presence to a total of 12 Venezuelan states.

Gold from Venezuela, Cocaine from Colombia

Southern Venezuela has become a gold mine for Colombian guerrilla groups, including the ex-FARC Mafia. A report by Armando Info revealed that Jhon 40 had led efforts to control illegal gold and coltan mines in the state of Amazonas since 2012. They now allegedly provide as much as 70 percent of his group’s revenue, according to Colombian intelligence documents cited by InfoAmazonia. Thus, the illegal exploitation of minerals in this area has served the dissident faction to diversify its sources of income.

A study by International Crisis Group highlighted that the Acacio Medina Front allegedly moves weapons, cocaine and money across the Guaviare, Guainía and Inírida rivers, which all flow between Venezuela and Colombia.

This investigation also found that illegal mining in Venezuela had become so lucrative that it was a major reason why the FARC’s former 16th Front, which is also close to Jhon 40 and his men, did not demobilize after the 2016 peace agreement.

However, illegal mining still has not topped drug trafficking as the ex-FARC Mafia’s most important source of income. From Venezuelan territory, these groups organize drug shipments from laboratories located on the Colombian side. The drugs are transported across the porous border through hundreds of remote trails and river crossings before leaving the country to head to markets around the world.

Another factor anchoring the ex-FARC Mafia in their new home is that their members are increasingly being bolstered by Venezuelan nationals, due to the country’s economic crisis and the internal and external migration of many Venezuelans.

According to estimates, around 10 percent of all fighters belonging to ex-FARC Mafia groups are now Venezuelans. A Colombian military intelligence report from May 2019 by estimated that of 2,296 FARC dissidents, 239 were Venezuelans. “They offered clothes, food, money, accommodation and a cell phone,” a 20-year-old Venezuelan immigrant told Reuters.

InSight Crime sources revealed in October 2018 that Venezuelan migrants were paid around $300 per month once they joined up, an appealing option when Venezuela’s minimum wage is now at around $2.

The ex-FARC Mafia have also been laying down social roots, similar to tactics they developed in Colombia. According to Fundaredes, elements from the dissident 7th, 11th and 33rd Fronts set up a foundation called “Amigos de la Escuela” (Friends of School) in Venezuela’s state of Táchira to deliver school supplies to children, while also gathering precise information about the students in each school for possible recruitment. These groups have also been using Venezuelan radio stations to send propaganda messages.